The green had gone out of the meadows, and a faint smell of rot and mold rose up to the newcomers. The only colors left were those of swollen giant mushrooms and of garish, poisonous-looking blooms that suggested nothing so much as the figments of a maddened brain. Enfeebled and trembling, the innermost heart of Fantastica was still resisting the inexorable encroachment of the Nothing.

Ioan Couliano, the Romanian historian of religion assassinated in a University of Chicago restroom in 1991, began his last book, The Tree of Gnosis, with a discussion of Einstein and the Flatland. Couliano explains that a significant source for Einstein's special and general theory of relativity was Edwin Abbott Abbott's popular book, Flatland, first published in 1883.

According to Couliano's scholarship, just as Abbott speculated on what a three dimensional object would appear like to hypothetical beings inhabiting a two dimensional world, Einstein carried this speculation one giant step forward: how would a four or higher dimensional object appear to people living in our own 3D world? From this basic analogy emerged Einstein's famous theories of relativity and "his view of the universe as being the hypersurface of a hypersphere."

Of course, I am grossly simplifying Couliano's own simplification of Abbott's influence on Einstein. The point, as always, is the creation of metaphors. Couliano's own metaphoric representation of Flatland is what he calls "Soupland." The 2D inhabitants of Soupland are the small circles of oil on the surface of a bowl of soup. Couliano asks, what would a spoon, breaking through the surface of the soup into its depths, be experienced as for these soup scum denizens?

Undoubtedly, taken as one movement it would be a world shaking phenomenon, but as they would have no notion of the third dimension it would probably seem like a series of strange yet apparently unrelated events. The wisest of the soup scums might have a inkling that there must be something bigger and more powerful linking together all of these uncanny occurrences, but they would have no means by which to determine what that something is. Something exceedingly weird had happened -- was happening -- but on this observation only could consensus be reached. Interestingly, in Aleister Crowley's 1917 novel, Moonchild, an identical thought experiment is performed using the image of a wooden cone breaking through the surface of water in a basin. Crowley writes as the magician, Simon Iff:

Now, what does the water know?

Nothing about any cone. If it got any idea that the various commotions were caused by a single object, which it would only do if it compared them carefully, noted a regularity of rate of increase in the size of the circle, and so on -- in other words, used the scientific method - it would not evolve a theory of a cone, for we must remember that any solid body is to it a thing as wildly inconceivable as a fourth-dimensional body is to us.


Couliano uses the very similar Soupland metaphor to explain the methodology he employs in The Tree of Gnosis. Couliano calls this method "cognitive morphology," by which a complex, multifaceted and multi-denominational historical phenomenon -- in Couliano's study, Gnosticism -- is examined as an "ideal object" that is "transformed," or represented differently, according to the unique intellectual or logical perspectives of its observers.

It should be noticed from the beginning that all gnostic systems, without exception, appear as transformations of one another and therefore can be said to be part of a larger "ideal object," whose possibilities are being explored by human minds at all times, regardless of time and space... gnostic myth originates in the transformation of other myths... gnostic doctrines ultimately derive from one another not through direct transmission but through a cognitive process of transformation.


The "ideal object" of gnostic revelation -- the spoon of Soupland -- is interpreted very differently according to who experiences it. The exegesis and systemic interpretations that follow from this revelation are extremely varied and at times even contradictory -- the terminology differs, alternate logical conclusions are made, and the myths are transformed -- but the "ideal object" that these sects and individuals are attempting to describe is essentially the same. 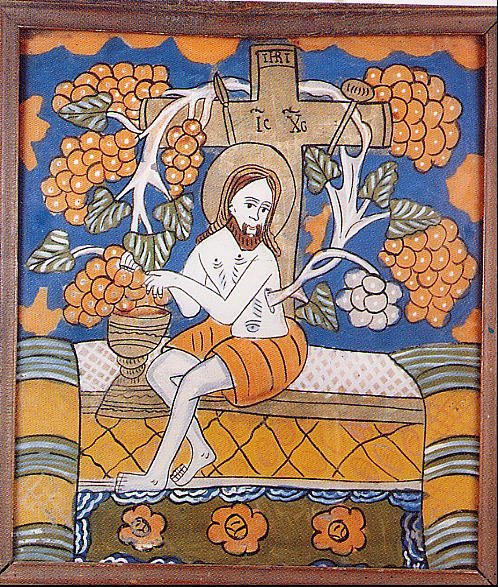 And while many such ideal objects could potentially exist, Couliano emphasizes early on that Gnosticism itself mostly represents a diverse set of perspectives on an ideal object that was, and is, the focal point and epistemological axis of all Christian theology both orthodox and heretical: the supposed Incarnation of Christ, the Word made Flesh, the irruption of the Logos into history, the perfect union of Spirit and Matter.

The "event," this "ideal object,"when surveying as Couliano does all of the varied orthodox, heretical and gnostic interpretations/misinterpretations of it, is hermeneutically bottomless. It is a mystery without resolution. And now, over two thousand years later, this great mystery, although much faded in memory, still persists (as even outright denial is also an interpretation).

It is interesting, then, that Terence McKenna -- prophet of singularity and the ultimate concrescence of novelty -- also pointed to the incarnation of the Logos as a kind of pedagogical device. And it, at the very least, could be compared to humanity's encounter with what he likewise called the "hyperdimensional object" that was to happen, by his reckoning, in 2012.

We all remember the swelling wave of expectation and near hysteria that swept over the culture building up to the winter solstice of that year. The anticipation -- in echo of Hollywood, of the clamour of the New Age, of McKenna himself -- was for a climactic happening, terrible or wonderful, that would utterly and instantly end history and even transmute the fabric of reality. This might take the form of an alien invasion/disclosure, a mass consciousness shift, Earth changes, the hand of God, yet none of that or anything similar actually occurred.

And as uncritically and effortlessly as we accepted the theories of 2012, we at once dismissed them in like manner as being delusional or fraudulent afterwards. 2012 was just another passing spectacle or scam. Nothing even vaguely transcendental happened and the world merely continued its incremental and dreary slide into banal entropy. Or did it?

To get back to Couliano, what would an encounter with an ideal or hyperdimensional object actually look like to us three dimensional beings? How long would the encounter last? Who would notice it? How would it manifest itself? If it first appeared, like Crowley's cone on the surface of the water, as a single point, then wouldn't it be overlooked by virtually everyone?

Is this what really happened on 12/21/12? Only the slightest initial rupture of the surface of our 3D continuum by the hyperdimensional whatever would, regardless of how loud the foreshocks of anticipation, be noticed by nobody. Initially, the point of contact would be indistinguishable from any other coordinate in time and space. Only gradually, using the Flatland or Soupland analogy, would this "point" ripple out to wider and wider circles. Only at this stage would it begin to become noticed by the very perceptive few. 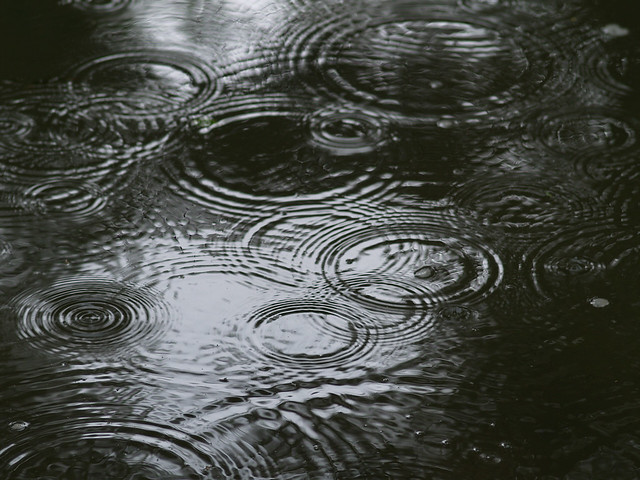 But what would be noticed? If we accept, along with McKenna and Couliano, that the Incarnation of Christ did represent the arrival of some sort of hyperdimensional object, then we may hypothesize that it would arrive again in a similar manner: within the medium of human thought or consciousness. The ripples, should they be felt, would be noticed first within human culture, involving human means of communication.

And it, like the Incarnation, would not initially effect the content of culture -- that would come later -- but with the very forms or structures of communication and thought. The transcendent object becoming immanent -- where the spoon hits the soup -- is primarily ideal, primarily mental (although anything affecting the mind will eventually affect the body and vice versa).

As an exercise in bad poetry, therefore, let's accept for a bit that this has happened. Let's accept that McKenna and the Mayan calendar and the New Age Casandras and Panglosses and assorted cults and secret societies were all right about 2012. But to be clear, they might have been right that something would happen in 2012 but, insofar as they prophesied a dramatic climax of some sort, were absolutely wrong about what it would be.

McKenna insightfully observed that as Jesus Christ's whole ministry only lasted a mere three years and yet totally changed the world, a similar incarnate event in our own accelerated and interconnected global paradigm would only need to "minister" for a fraction of that time. But why should we assume this to be the case? In some versions of the story, Christ's entire incarnation was 33 years. Why wouldn't the present encounter be at least as long?

So again, let's assume hyperdimensional contact did commence in 2012, but at first only gradually, imperceptibly, a slowly widening circle of disturbance. As in PKD's own metaphor of the arriving Logos, it comes into view like a zebra cautiously exiting its camouflage of high grass. Now, slightly more than four years later, its effects -- although still not positively identified by anyone -- have become readily apparent even within "mainstream" channels of communication.

It is also of little surprise that the eye of this cyclone of weirdness has emerged first in the heart of the world's principal media, financial and military empire, the U.S.A. From this vantage point it would emanate out and infect all of human culture and thought.

A detailed survey of its possible reverberations is required. But as its contours and impressions are by definition unknowable, we are really whistling in the dark. As always, we are discovering patterns that may only exist in our imagination. And yet it could be that it is the imagination that is the actual object we are attempting to describe. We can only plunge in.

The ideal object does not arrive as a definite something -- the classic UFO landing on the White House lawn -- but as an indefinite everything.

The surest sign of its emergence is the total breakdown of consensus. This has been occurring for many decades now, just as the Incarnation of spirit into matter was expected by thinkers and visionaries for over a century before Christ, but at this moment it has become an undeniable crisis for everyone.

Donald J. Trump, billionaire and reality TV star, has inexplicably for millions become the president of the most powerful nation in history. In a way, Trump's triumph is the culminating point of the new Incarnation. He -- the man -- is not the Messiah or the hyperdimensional object in himself, but he is a kind of threshold where the effects of that object become evident to most.

A demonstrator in New York City held a sign stating that the election of Trump was worse than 9/11. In a way, she is right. 9/11 was still confined within the consensus narrative, the conspiracy theories questioning or doubting the official story of 9/11 only circulated gradually. It took years for these theories to reach the mainstream, and even after that the discourse took on a predictable dichotomy: the sane official story vs. the wild conspiracy theories.

In this dualistic form the consensus persisted, but 9/11 was really the shot across the bow. The consensus began to really fray at this point. Conspiracy theories began to multiply. The consensus remained, but the counter-consensus fragmented endlessly. 9/11 was the foreshadowing in physical form of the more significant ideal encounter with the wholly other beginning in 2012, yet not really noticed by most until the present moment. By Bloomsday 2015 it took on an uncanny yet definite form. 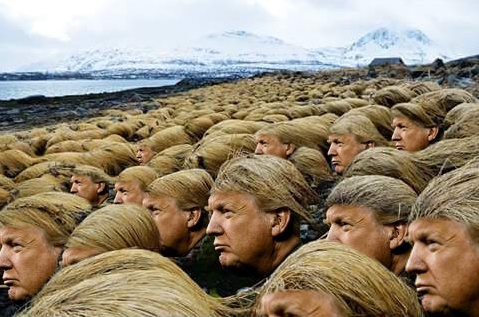