He floated among us us like a piece of thistledown, indolently haunting the sunny corner of the playing-field, not listening yet not remote. It was through him that I have nosed round without ever precisely touching the Latin classics and have also derived some of those persistent habits of thought which make us irredeemably lop-sided -- for instance about crucifixes, that they are the mark of the devil. Our half-loves and half-hates and ambiguities on these points were to him indefensible treacheries. And yet he floats. At the edge of the swamp. Antlered devils crucified during the uprising. Half-states and interzones. Ever more sparse and obscure. Marginalia on the inner bindings of Empire. Letters scratched in, blurred, barely legible, even still haunting the unambiguous. But once there was a time when the megamachine collapsed and everyone became immortal.

As noted before, the most massive collapse of the megamachine seems to have occurred at the early period when the Pyramid Age, to judge by its mortuary remains, was at its height. Nothing short of a revolutionary uprising can account for the interregnum of some two centuries that separated the "Old Kingdom" from the "Middle Kingdom." And though the archaic power complex was finally restored, it was modified by various important concessions, including the extension of immortality (once a Pharaonic or upper-class privilege) to the population at large. Nothing prepares us for this. Taken up into the air. Not a word is found of this in Latin or Greek or derivatives thereof. Scythed he stalks, once crowned with gold. The complex power of the Devil is finally restored, and yet a vague, indolent memory remains. As Milton lets slip, there is Chaos that even evil dreads. A moment when whatever it is that sustains any perceivable structure suddenly caves in. Scurrying feet and other embarrassed movement. Convulsed and horrific, yet awkwardly serene.

At this dread moment the whole distorted face of nature, smote with convulsive sympathy, appear'd to share the horrors of the scene.

The noose itself has gone elastic. Fling-backs snap at skin as we run through the branches. Yes, even he floats without even trying. Surface tension. Shaved legs. And all of these words are over our heads. Why? Because they too first arose through a treachery that cannot be defended. But only in terms of law. And what of that exists in these parts? Deformed? Unformed and unformable, more like. Convulsive yet sympathetic. The thunder first spoke here. Informative.

It was dropping like a penny in an automatic machine, for he instantly burst out with a shower of words like "deformation," and "minimum of energy"; and I had to stop him, and say that such words were over my head, and that they did not help me to understand the word elastic. I asked him if a piece of elastic was elastic, and he rather grudgingly allowed that it was. 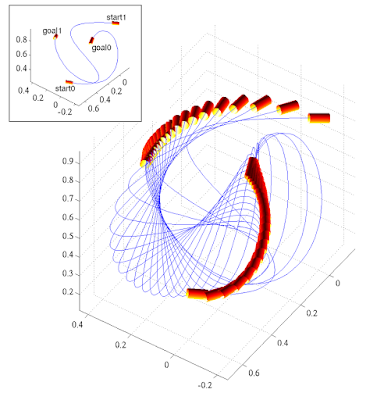 Goals and starts and starts and goals. Whirl-swirling back to some indeterminate centrepoint and then careening out again into the nebulous. This is the shower that bursts and is bursting at this very height of the Pyramid Age. Is this what is being described by elastic signs and ciphers? Paradoxical "points" of minimal/maximal energy and indolence. A storm blows while we try to sleep.

In the North is the Earth-owner, the imaginative child. Summoned by arches and angels. It always (He always?) (She always?) arrives with pain and fear. The womb already has a Euclidean view. They alight at the sunny corner, at the apex, at the pillared threshold, winged messengers of a time between kings, of a space between words. Really nothing but a clot.

As I hadn't anything better to do I agreed to do as my aunt requested. I took my slate and demonstrated to her the first two propositions of Euclid. I was about to pass the third when my aunt tore my slate from me and said, "My clot of a nephew, hasn't geometry even shown you how babies are made?"

Here the marrow of the bone is tasted once more. Back at the edge of the swamp and feeling fine. The vesica is vexed at its inability to explain anything, and the black slate is finally torn from our hands. This is the storm that will make us all immortal once more. Interregnum. Coming from the North with halos faded into purple, eventually bearded and wearing a net. Half-moose, half-harinezumi. Met in the air that is neither Rose nor Pit. Through the clot and the uprising and tromping through the playing-field, it begins again with antlers of gold. And we as always, in our lop-sided manner, snicker and wonder.
Posted by znore at 8:23 AM 3 comments: