Three Games of London and the Venus Transit

By now the clamour of voices speculating about what could happen at the London Olympics, and what it all might mean, is becoming deafening. The speculation is becoming almost as much a part of the event as the Games themselves. Could this be part of the plan?

This blog has also done its part to add its small voice to the general din. The point here, though, is not to offer any conclusions about what will occur, or even to imply knowledge of the correct interpretation of symbolism. The purpose of these posts on the Olympics is to examine what the spectacle of London 2012 can teach us about the particular weirdness of these times.

Previous posts have been about the location of the Games, the Torch Relay, the Opening Ceremony, the patron saints of Britain and how they might relate to London 2012, and possible predictive programming. This blog, while trying to sum up the research of others, has attempted to add new information -- especially information occurring as synchronicity.

This will be the last post directly on the Olympics before the Opening Ceremony. Among other things, it looks into a pretty startling synchronicity involving the three previous Olympics in London and the Venus Transit.

The Rose of Heaven


The last post argued that the 70-day Torch Relay of London 2012 could represent a journey to the underworld. Within this period two major astronomical events occurred which represent in a shorter duration this same journey.

The most significant of the two is the Venus Transit. Venus transits the Sun twice in an eight year cycle. In the most recent cycle, the planet's first journey across the face of the Sun happened in 2004. This year, Venus made its return trip. This has not happened since 1882, and will not happen again until  2117. It is the rarity of this transit that makes it so amazing.

Being both the Morning and Evening stars, Venus makes a short journey into the underworld every day, just as Sun does.

What is unique about the Transit period, however, is that Venus becomes visible while in the underworld:

From the last days of May to mid June Venus will not be seen in the sky. The most intense period is June 4th – 6th. On the 5th is the exact Transit of Venus. Symbolically speaking Venus is not only in the underworld (invisible to us) but she is exactly conjunct the Sun. She is neither Evening or Morning star. She is truly between the worlds; suspended at that eternal moment after the inhale, before the exhale or possibly after the exhale but before we breathe in. We too are meant to be suspended in those days. Especially on the evening of the 5th.


The eight years separating the two halves of the transit is due to the orbital periods of the Earth and Venus. As Venus is closer to the Sun than our own planet its orbit is quicker and it frequently "laps" the Earth. For every eight Earth years, Venus has already orbited the Sun thirteen times. This gives us the very curious ratio of 8:13, and from the vantage point of an observer on Earth, over an eight year period Venus traces out a very beautiful rose-like pattern in the sky.

There is abundant evidence that this pattern has been known by astronomers for a long time, and that the five-petaled, rose-shaped symbol, called the "rose of Venus" or the "cinquefoil", can be dated back to at least Roman times.

In Dante's Divine Comedy, the rose pattern appears in the sky not in connection to Venus, but as the spiritually higher, Empyrean -- the dwelling place of God. Dante explicitly calls this the Rose. Clearly, the rose-shaped orbital pattern is far more important than even Venus herself.

The Venus Transit mythologically represents the birth of Venus. It is extremely interesting that Venus/Aphrodite is the mother of Aeneas, who in Virgil's Aeneid also voyaged to the underworld, and therefore the whole line of Roman kings and emperors trace their origins back to the goddess.

Here, Aeneas is shown receiving armour and weapons from his mother, the goddess Venus, before his important battle to conquer the future site of Rome. Accordingly, this mythology is present at the core of Western civilization. 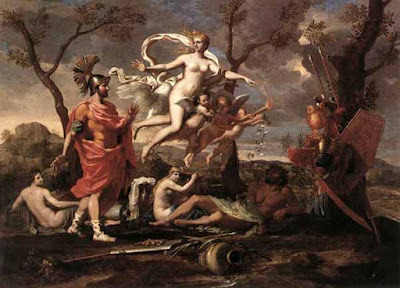 Venus also plays a big role in Mayan mythology. Aug. 11-12 3113, when the 5125 year Long Count cycle is said to have begun, is called "the birth of Venus." The god, Queztalcoatl/Kukulcan, was identified with Venus.

Mayan astronomers closely tracked the cycles of Venus. The Mayan Calendar Round is 52 years (a number which will take on greater relevance our analysis develops), and two such cycles, making 104 years, was viewed as synching with the larger Venus cycle.

Most likely a coincidence, right? It gets stranger, however, when we consider the 1948 London Olympics. These games were 64 years ago. This means that the 1904 Games were roughly thirteen 8-year Venus cycles prior to this year's return Venus Transit, while the 1948 Games were eight Venus cycles before this year.


Was this in some way planned? Were the years of the three London Games consciously chosen to symbolically reflect wider patterns in the cycle of Venus, culminating with the Venus Transit of 2012? A question like this appears ridiculous until we consider again that London is the only city that has hosted the Olympics three times, and 2012 is the only year during the history of the modern Olympics which has seen a return Venus Transit (and this happened during the Torch Relay).

If we do the same calculations from the 2004 Olympics in Athens (the initial Venus Transit for this cycle), we can get back to 1900 Games in Paris but the 1940 Tokyo Games were cancelled because of WW2. Neither the cities or the dates line up. Only with the three London Games does the really striking 13:8 Venus ratio match perfectly.

So could this be planned? Upon further research this seems impossible. The 1908 Olympics were only held in London because the Games scheduled for Rome were cancelled due to the eruption of Mt. Vesuvius in 1906.

Likewise, the 1948 London Olympics were originally scheduled for 1944, but had to be postponed because of the war. Did the Black Magic Engineers of global events directly cause the volcanic eruption and prolong the world war in order that the London Olympics would sync up with the Venus cycle? Unless we assume, as perhaps some do, that these engineers are the ancient gods themselves this seems fairly impossible.

Are we back to coincidence then? Or is something far deeper and far stranger in play here? This blog is exploring the idea that it might be the latter.

And to further heap weirdness on top of weirdness, in the last post we've seen how the 8000 miles of the Torch Relay is possibly connected to a Dantesque journey through the center of the Earth. The Earth's circumference is roughly 8000 miles, and is rounded off very roughly as 13,000 kilometres. 8:13 yet again!

There are a couple more relevant connections to the Venus Transit that should be touched upon before looking into the annular eclipse of 5/20.

Dragon Boat of the Underworld


The Diamond Jubilee weekend events of June 2nd to June 5th, including a 1000 boat pageant up the river of the underworld and the lighting of the beacon with a diamond/vajra, occurred in succession with the Venus Transit and the partial lunar eclipse of June 4th.

Again, it would be stretching it to say that there is a definite connection between these two sets of events, but symbolic parallels can be drawn.

The riverboat pageant on the 3rd, which made its way down the Thames passing under several bridge stations where thousands watched, seems to suggest the passage of Venus across the face of the Sun on the 5th/6th.

The Royal Barge, Spirit of Chartwell, carried the Royals with golden dragons featured on its prow sculpture. If we allow ourselves to be culturally promiscuous in assigning symbolic meaning, the dragons could resonate with the red dragon of Wales, the Venus dragons of Mesoamerican mythology, and 2012, the Chinese Year of the Water Dragon.

This Chinese zodiac sign is especially interesting as the last time it was the Year of the Water Dragon was in 1952 -- the year Elizabeth was made Queen. Sixty years, in addition to marking a Diamond Jubilee, also completes one full cycle of the Chinese zodiac.

The other major event of the Jubilee weekend was the beacon lighting, already mentioned in the last post. The lighting of thousand of beacons in succession across the planet on June 4th, the day of a partial lunar eclipse, also gave the sense of a passage recalling the Venus Transit. 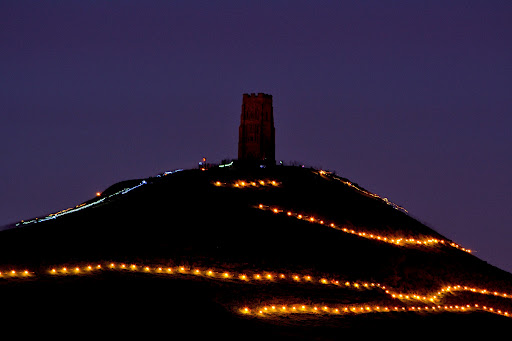 The intrepid researcher, Goro Adachi, has written of the parallels between the Venus Transit and the last voyage of the Space Shuttle, Enterprise, up the Hudson river on the same day.

I'm not sure exactly what to make of this, but there's a lot of food for thought contained in it. Like the riverboat pageant, like the global beacon lighting, this journey of the Enterprise up the Hudson certainly resonates with both the Venus Transit and the longer journey of Sirius through the Duat.

A Woman Clothed with the Sun


One last interesting connection I've come across on the web concerning the Venus Transit also involves a queen and a dragon.

King James Version (KJV)
12 And there appeared a great wonder in heaven; a woman clothed with the sun, and the moon under her feet, and upon her head a crown of twelve stars:
2 And she being with child cried, travailing in birth, and pained to be delivered.
3 And there appeared another wonder in heaven; and behold a great red dragon, having seven heads and ten horns, and seven crowns upon his heads.
4 And his tail drew the third part of the stars of heaven, and did cast them to the earth: and the dragon stood before the woman which was ready to be delivered, for to devour her child as soon as it was born.
5 And she brought forth a man child, who was to rule all nations with a rod of iron: and her child was caught up unto God, and to his throne.

A crown of twelve stars. What does that recall? Does any of this have anything to do with the Venus Transit, the London Olympics, Queen Elizabeth, 2012, etc.? It's easy to accuse web researchers of mistaking poetry for reality, but what if reality is poetry?