A short note on Tactics

Plunging deeply into McLuhan's weirdness, an insight arrived concerning the media subversion of the present and the suffocating built environment. This can be sloppily formulated like this:

Mythologize the Linear
Deconstruct the Spectacular


Before getting into the meaning of such a formula, it is imperative to have a clear idea of just where we're at. Despite about a century and a half of the increasing saturation of global societies by electric media -- from the telegraph onward -- and despite within this even several decades of full electronic incursion -- TV, satellites, computers, the Internet -- the world, at least structurally, is still mired in print-based values.

Under the apparent sway of the electronic media none of the pernicious things that McLuhan, tongue in cheek or not, predicted would pass into the dustbin of collective human folly, given the obsolescence of print, have actually retreated. In fact, most have become stronger, even more entrenched.

It is not only our educational system that cannot stand up to the new electronic speed of information movement. The stock exchanges of the world are just as helpless and will disappear under the impact of the computer in a few years. The large cities of the world are so obsolete and irrelevant that they will all suffer the fate of London Bridge which has not fallen down but is to be taken down and transferred to the private property of a Texan. Within ten years New York will have been dismantled and the ordinary citizen will have returned to life on the land. There will be no roads and no wheels but only anti-gravitational transport. One of the paradoxical features of substituting software information for hardware machinery is total decentralization.  -- War and Peace in the Global Village (1968)

All of this certainly is in flux, and "there's no tellin' who that it's namin'," but it is clear that at this moment, at least, the global village does not at all resemble tribal society. We are still very much trapped in the Machine.

What happened? Was McLuhan wrong? Are we still enthralled in the age of print? Still under the domain of the Eye? Or is it simply taking a lot longer than expected for the full transformation to take place?

At the same time, though, the transforming effects of the electronic media have never been more obvious. Each part of the world is intimately intertwined with every other part in a way that is historically unprecedented. Information, from all quarters, is broadcasted and narrowcasted to the entire globe. The full exteriorization and collectivization of the central nervous system is right there for any one with eyes that see. We are kept entranced in a perpetual 24-hour cycle of infotainment and distraction.

As the result of the endless repetition and diffusion of information we have once again entered a mythic timespace. The archetypes and old gods are now easy to spot. We all follow the stars. Everything is connected, each screen reflects all other screens. The whole thing syncs. Are we there yet? Have we finally attained the post-mechanical, nondualistic, synesthetic utopia that artists and other sensitive souls have dreamed of for centuries? Evidently not.

We are instead the abused slaves of a monstrous hybrid. A mythical electronic shell masks a rigid mechanical exoskeleton. A schizoid schism representing the very worst of the tyrannies of Ear and Eye now throttles the Earth in its deranged mania. Endless spectacle -- including all news, both "mainstream" and "alternative" -- keeps our minds fogged and our senses overwhelmed, allowing us all to pretend to forget the totalitarian mechanization of all aspects of life.

Our tactics of subversion, our desire for autonomous expression, should reflect this schizoid condition. The mythic masks the mechanical. The spectacle is the lipstick on the pig of the Machine. The counter-spell to this -- McLuhan's anti-environment -- cannot therefore be purely mythical or mechanical. It cannot solely be expressed by the electronic media or by print. Instead, in the ever-transforming media ecology, we need to strike with different media at different facets of the Spell.

How does this work? What follows is more of a set of suggestions and deflections than any sort of a prescription. Only suggestions are appropriate in an environment where no feature is constant. It might be best to start with what does not appear to be working.

Exposing the Conspiracy by naming the names, ripping off the masks, meticulously mapping out who is linked to what clandestine organizations and what nefarious individuals, seems only to have made the conspiracy stronger. Global conditions are worse than ever. Why?

Could it be that the conspiracy theorists themselves are writing the myth of the conspiracy? Does whatever that is blocking our collective perception draw its lifeblood from metastasizing into a single omnipotent, monolithic Agenda -- a self-conscious, Leviathanic archetype of total power? Does the spectacle want to become spectre?

More and more this is becoming just too obvious -- from popstars using "Illuminati" handsigns, to the now almost cliched display of esoteric symbolism at international entertainment and sporting events, to the pastime of spotting "crisis actors" at the weekly atrocity reality show -- and it should become clear that we are writing the script. We are making the Spectacle even more spectacular. We are painting the masks, not ripping them off.

And our choice of media is even more important. To frame an event in video, capable of easy and endless repetition, is to create myth. And all videos inter-reflect, inter-penetrate. Youtube in its entirety is its own context. Now you are part of the tube. A cat purring by a warm fireplace is exactly as significant as a video "exposing" the attacks of Brussels as a false flag event, and the cat video is more entertaining.

Each screen is a portal into a hall of mirrors with an endless succession of fractured images -- pet tricks, massacres, advertisements, summits, panics, ecstasies, celebrities.

Is the Spectacle all-connected? Of course it is. This is the nature of myth. Does it challenge the structure of power or raise the consciousness of the powerless to point this out? Perhaps there is a momentary high, but little more than this. To make a video demonstrating this only makes the myth stronger.

Instead, deconstruct the spectacular. Extraction from the sweet suffocation of myth is possible with literary detachment. Print, paradoxically, has become a subversive anti-environment to the electronic media trance world. This is precisely why McLuhan wrote books. The printed word still has the power to remove oneself from the fray, to attain at least the illusion of objectivity.

With print and texts we can answer these questions: From where and when did these myths originate? Which cultures did they arise from? Which first presented them to the global academy? Which popular writers then took these themes from scholars (often without credit), dumbed them down, sexed them up and declared them to be timeless wisdom to the enlightenment-starved masses? Which writers, producers, directors, artists subsequently transformed all this into Hollywood magic and why? And from here -- how was society altered by this process? What agenda was advanced? What sectors of power benefited? How precisely did people become entranced?

Because there is very little timeless wisdom. Mythic themes, however often they recur in history, have their own history. This context of who and how and where and why and when can be traced. Analysis and detachment makes the Spectacle impotent.

And yet -- mythologize the linear. This is the place for the electronic media as a tactic of subversion. The linear, mechanized, alienating super-structure of the Megamachine must be itself be converted by perception into myth. It, in all of its banal drudgery and lifeblood-sucking horror, should be revealed as the monster of myth that it is.

Films like Charlie Chaplin's "Modern Times" and "Koyaanisqatsi" do exactly this. They don't present a spectacular fantasy that we can all dream of escaping into, but instead they reveal the mythic terror of modern society, the Auschwitz logic of the hyper-mundane, that we all are forced to exist within. The archetypes of this myth are more akin to the Minotaur or the Juggernaut than anything fair or fanciful. But even here heroes and heroines will emerge.

We head to battle on our daily commute through the waste land. The windmills -- or oil refineries or nuclear power plant or institutional bureaucracies -- really are giants. Quixote's quest to save the world for romance is not a flight from reality if we become aware that it is a mechanical spell that has blinded us from beholding the poetry of life. To transform it by perception into myth we can begin, like Quixote, to see the beast and begin, like Chaplin, to gum up the gears.

All this is not really science, but only scientology. It is language. It is the magic lullaby in which the shapes of things melt and reshape themselves forever. And so, when we would try to stop that wheel we call the mind, and look between the spokes, at once the All-Thing in its turn begins to spin about us, and all which it contains to slide and glide away:—as in that wondrous story of creation handed down from Finnish sorcerers of old, when the wizard Lemminkainen comes into the hall and sings; and while he sings the swords vanish out of the hands of the feasters, and the cups vanish from their lips, and the tables and the walls melt and fade, and lastly the hall itself and all within it melt and fade away, and only the magic song goes on. -- Allen Upward, The New Word (1908) 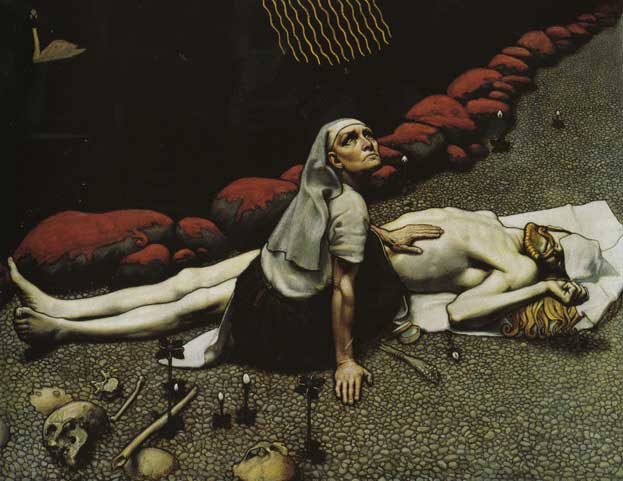